It was in 1845 that Sir John Franklin departed from England on an expedition to discover the Northwest Passage. In 1846 his two ships, the Erebus and Terror were trapped in the ice an abandoned two years later. Everyone on the voyage died, leaving little evidence to be found. The mystery of what happened to the ships has been ongoing over 150 years. Many have tried and have failed to find them, but this year the government of Canada decided to renew the search for what they call our “only undiscovered national historic site”. 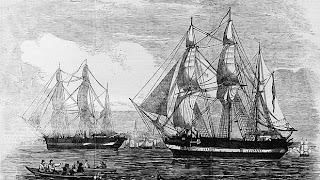 This blog has everything you need to know about the expedition to find Franklin's ships and the history behind the project.
Posted by Unknown 4 comments:

What to Learn more? 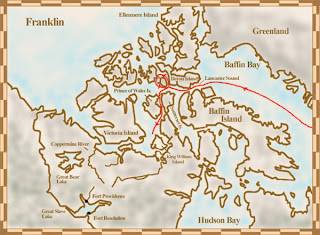 What Did They Find?

While the 2012 expedition wrapped up this September, archaeologists on the expedition in the Canadian Arctic have discovered the human remains they believe are from members of the crew. The underwater expedition did not turn up any ships, but what they found on land was more artifacts from the ill-fated expedition in 1845. At Erebus Bay, where members of the crew were known to have died, more human remains were discovered. Among them were a human tooth, scapula and vertebrae. They also found a toothbrush, nails with Royal Navy symbols, buttons and tiny scraps of cloth on King Williams Island. The button has “Portsmouth” engraved on it. Some of this archaeological work included the use of a metal detector.


While this expedition is good for many researchers and for mapping out the sea and making it safer for ships traveling through the area, one has to wonder, are there ulterior motives to the Canadian government backing up this expedition? The answer to some is an obvious yes.

For Geiger, who is the editorial board editor for the Globe and Mail, the government’s willingness to incest in the Franklin search signals that there is far more going on with this project than simply an interest in finding two old ships. An investment like this simply for the pursuit of historical knowledge is unprecedented. Some view is as a way to assert Canadian sovereignty over the Arctic Islands and waterways. This is becoming more significant as the climate change is affecting the north and opening it up to more foreign vessels.  Canada is using the Franklin shipwreck to assert a greater claim over the Northwest Passage; though this is debated by many as having no real political impact on these affairs.
Posted by Unknown No comments:

Sir Franklin had the best technologies for his ship when he left for the Northwest Passage, but their modern day engineering failed them. But today there is one price of technology that is bringing up the hopes of the crew on this expedition. From the University of Victoria comes something that resembles a yellow torpedo that measures about four meters longs. It called “Mano”, Hawaiian for shark, and it is a fully autonomous submarine that has been outfitted with a fully sonar system.
Mano is a self-guided drone that map objects down to a centimeter in size, mapping the sea floor over a fairly wide swath beneath the vehicle. Unlike other GPS and satellite receiver that are connected to the boat and depend on good weather, i.e. no wind, so clear picture, Mano dives beneath the waves securing a clear picture of the ocean floor by bouncing sounds waves. Mano can essentially drive right below bad weather and prowl over the sea floor at a predetermined altitude. It has the ability to run for 12 hours at a time, with the only downside being that you cannot get live updates on the floor, but all the information is downloaded at the end of the day.


During the 20th century, survey launches became motorized and advances in electronics set in motion a series of revolutionary changes. Measurements in the old days were taken by dropping the leadline into the water and reading the depth from markings on the line once the lead at the end of the line reached the seabed, then pulling up the line and moving to another position. Today, sound has become the new tool for measuring water depths. This technique evolved to the point where there was a continuous line of soundings being recorded. Now hydrographers can generate three-dimensional images of the seafloor by multibeam sounders, equal to land-based mapping by planes. This technology means that we can not only map the seabed, but can also produce information about its characteristics.
The expedition has also sued LiDAR (Light Detection and Ranging) surveys. This uses laser to measure water depth from an aircraft. This method shows promise for acquiring the same coverage as multibeam, but at the speed of n aircraft.


The 2012 expedition is being led by Park’s Canada under the National Historic Sites Directorate and the Underwater Archaeology Services Program. The expedition is expected to take 4-6 weeks starting in August and will cost approximately $275,000. This expedition is a continuation of Park’s Canada’s Underwater Archaeology Service surveys conducted in 2008, 2010 and 2011. Locating the HMS Erebus and HMS Terror continues to prove very challenging die to the vastness of the Canadian Arctic and the harsh conditions frequently encountered in northern waters. The expedition is also incorporating accounts of Franklin‘s ship and crew from Inuit traditional knowledge.

The search areas include both the O’Reilly Island area, west of the Adelaide Peninsula and where Inuit Oral tradition places one of the shipwrecks, and further north to Victoria Strait and Alexandra Strait, where the other vessel is believed to be located. Parks Canada partnered with the Canadian Broadcasting Corporation to bring this story to the Canadian public as well. You can find a lot of information about the expedition on their site.

For over 150 years people have been searching for the two lost ships, (the Erebus and Terror). Owen Beattie, a University of Alberta anthropologist let the first of 17 expeditions from 1981 to 2011. Going back to Beechy Island and King William Island, Beattie and his crew studied the graves, bodies and other physical evidence left by Franklin’s crew.


From 1981-82, the Franklin Expedition Forensic Anthropology Project (FEFAP) was conducted. The trek found archaeological artifacts related to the 19th-century Europeans and undisturbed disarticulated human remains. After examining the bones, Beattie notes areas a pitting and scaling, often associated with vitamin C deficiency, the cause of scurvy. He also noticed skeletal patterns suggesting cannibalism. They also found unexpected levels of lead in the bones, 10 times higher than the control samples taken from Inuit skeletons form the same geographic region. Other discoveries at King William Island include the remains of between 6 and 14 men and artifacts including a complete boot sole fittest with makeshift cleats for better traction.


In 1984, Beattie and his group exhumed three well-preserved bodies of crew members on Beechy Island in the permafrost. These men’s bodies were well preserved, and undisturbed for many long decades. There they performed autopsies on the three crew men. Trace samples from the body and hair of John Shaw Torrington indicated that the crewmen were probably suffering from severe mental and physical problems caused by lead poisoning. The lead poisoning most likely came from the tin cans in which their food was held in. the seams of the cans were poorly soldered with lead, which came in direct contact with their food.


Just to give you an idea of what lead poisoning can do; lead poisoning is known to cause insanity including delirium, cognitive deficits, tremors, hallucinations and convulsions. This coupled with the brutal cold, scurvy, and extreme isolation of being trapped at sea makes it a high probability that these men went mad.  This also contributes to the evidence of cannibalism in the form of gnaws and cuts on the human bones.
Posted by Unknown 4 comments:

History of the Expedition

Sir John Franklin set out in 1845 in the hopes of finding the Northwest Passage in order to have a faster trade route From Europe to Asia. He set sail with a crew of 128 men and three year worth of provisions. Franklin believed that they would be able to make it in one year, and so they had their mail sent straight to the orient, so it would arrive at the same time as them.


Franklin brought the finest crew and the newest technologies with him. The ships’ bows were reinforced with iron planks to help them break through the ice, and the cabins were even heated by hot water piped through the floor. Despite this, the trip was still doomed and the last people to see the expedition were two whaling ships, the “Prince of Whales” and the “Enterprise” in Baffin Bay.


After three years, and no word from the expedition, the Royal Navy launched a rescue party in search of the missing explorers. There was even a £20,000 reward for their rescue. By 1850, the first trace of the trip was found on Beechy Island in the Eastern Arctic: the remnants of a winter camp, along with the graves of three sailors.

Lady Jane Franklin, Sir John’s wife, commissioned a second expedition that located handwritten messages left by the crew under a pile of rocks. The report was that the two ships, the Erebus and Terror has been locked in ice for over a year and a half and 24 men had died during that time, including Sir John Franklin. Because they were running out of provision, the crew decided to abandon ship and trek south. This message was found along with a couple skeletons of the sailors who had not made it.